The members of Tetrakhia wear similar outfits composed of bandaging covering the upper torso beneath a black vest with frill lining and a fluffy red collar accent by gold studs and a star. Crimson roping resides over the navel. The ruffled white miniskirt is slightly different for each member, with pieces of black and red fabric over it. Large roping hangs from each the back of the skirt, and each girl wears a pair of black laced boots that have a crimson cuff. Each members have different leg accessories, their gold neck pieces have a necklace and two black straps on them, and each girl has black finger-less gloves with two straps on them.

Tetrarkhia is an alternate spelling on the Greek word Tetrarchia (leadership of four), which in English is Tetrarchy. A tetrarchy is a government that is led by four people in power, but is commonly known as the form of Government used by the Roman Empire. 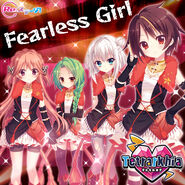 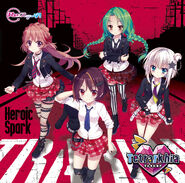 Heroic Spark (2nd Single )
Add a photo to this gallery

Raise Your Fist (1st Album)
Add a photo to this gallery
Retrieved from "https://projectrst.fandom.com/wiki/Tetrarkhia?oldid=2379"
Community content is available under CC-BY-SA unless otherwise noted.